Hope for the Future

Some of you who know Becky and I know that we love going to the movies.  From our humble beginnings when we were “just friends” until now…we have seen a lot of movies.  Yes, the movies cost a lot of money and the popcorn is definitely overpriced, but we (maybe me) enjoy it.

Today we saw the movie Queen of Katwe. The story is about a family who lives in the slums in Katwe just south of Kampala in Uganda.  Life was hard for the Mutesi family when they lost their husband/father.  Selling maize was barely enough to keep the family fed and sheltered.  They were a family who felt lost and forgotten by God.  The widowed mother struggled to keep her children from starvation, dying, and even worse…being carried away to an immoral lifestyle not pleasing to God.

Phiona, the second daughter, and her brother found themselves learning how to play chess.  They were taught strategic thinking and planning.  These lessons of moves and counter-moves carried the Mutesi family as Phiona found out that she was a really good chess player, even able to think ahead more than 8 moves within the game.  It was her hope to use her skills to provide for her family. 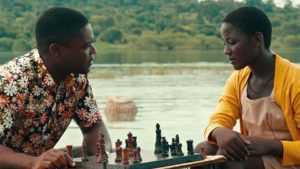 What an inspiring and original movie; A rare jewel that is not seen often in the cinema.  This is a movie that I would recommend.

The reality is…people out there in the world still do not know who Jesus is.  There are those who still do not have God’s Word in their own language. They do not have the Gospels in their heart language because it is either “too hard” to start because Christianity is not welcome in their country or the language has been has been told that the resources are not there to start a project.

God has a strategy and plan (moves and counter-moves) to bring His Word to the world’s forgotten people.  First, new language groups are still being discovered and the need is still great.  Second, people are asking to have God’s Word in their language.  It is no longer the day of the western missionary figuring out how to speak and write in the unknown language.  The people, tribes, and nations are doing it on their own being called by God to reach their people.

WA is bringing the resource of MAST to assist in this work.  Nationals are being trained through facilitators with the use of technology to translate the Bible at a dynamic and miraculous pace.  This picture below shows a mother from Guinea-Bissau and her baby strapped on her back while she is working the first edition of the New Testament in her language.  She is doing this for now, for her people, and for the future of her child.  How exciting to be part in something that has such eternal impact.  There is no time to waste. 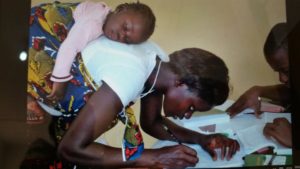 Be a part of the adventure https://bitly.com/HancockJourney