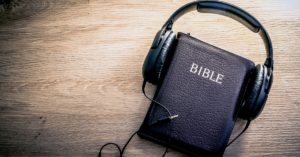 “There are entire massive populations of people who have totally, exclusively spoken languages,” says Bruce Smith, President and CEO of the Orlando-based Wycliffe Associates. “But Jesus died for them, j
ust like He died for you and me. We can’t leave them behind. We’ve got to reach them—and we will.”

Wycliffe Associates has developed a new means of reaching those with exclusively spoken languages: a Bible Translation Recording Kit (BTRK), which national translators can use to translate the Bible using the Mobilized Assistance Supporting Translation (MAST) method. The kit facilitates Bible translation just as quickly for oral languages as it does for written ones.

MAST is a rapid-translation method in which groups of mother-tongue translators work together in parallel to translate books of the Bible while maintaining the highest levels of accuracy and quality. Wycliffe Associates first tested the MAST method in 2014, when mother-tongue translators in Asia drafted 48 percent of the New Testament in their language in two weeks, compared to traditional translation methods, which can take 25 to 30 years for an entire New Testament.

“Our teams are committed to taking recording kits into the most remote areas to establish a foothold for the gospel, to lead people to Christ and ground them in the truth,” says Smith. “We know from our testing that this strategy is tremendously powerful.”

In the next 12 months, Wycliffe Associates hopes to provide at least 950 BTRKs at a cost of $500 each to national Bible translators of languages with no written form.